She has been making the most of a sun-kissed excursion to Thailand.

And Demi Rose set pulses racing once again as she stripped down to a daring one-piece bathing suit for a shoot in Phuket, Thailand on Sunday.

The model, 23, put on a sizzling display as she showcased her jaw-dropping curves in a golden one-piece with a dramatic cut-out at the abdomen, drawing attention to her taut midriff. 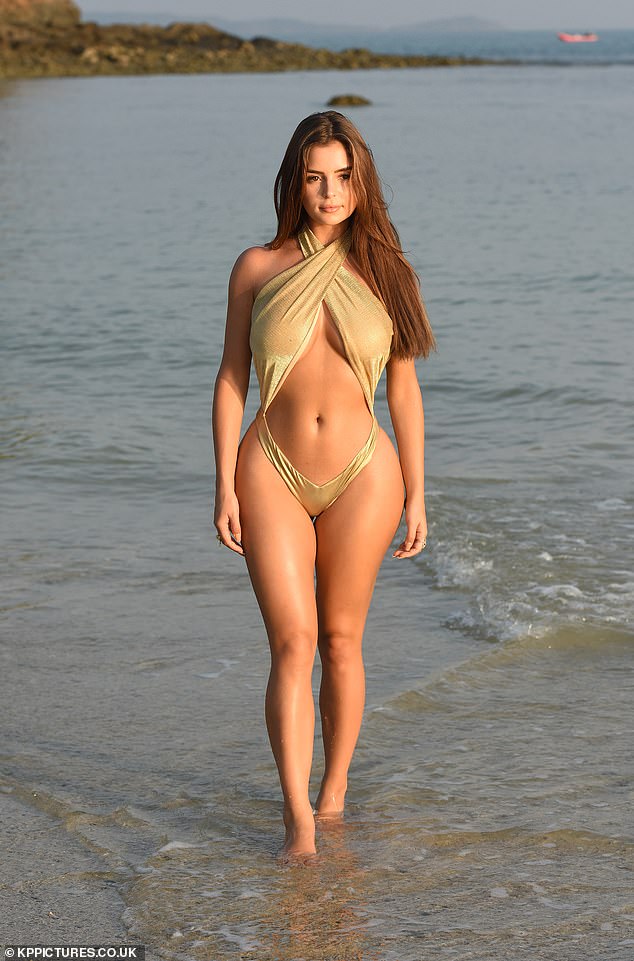 Turning up the heat, Demi posed seductively in the waters, splashing about as she showcased her famous derriere.

Looking every inch the star as she ran her hands through her golden brown tresses, Demi posed from all angles, highlighting her enviable frame.

The shoot was not just confined to the beach however as Demi later boarded a boat where she was joined by a large group of friends.

The brunette looked in high spirits as she posed alongside the bevy of beauties while enjoying the sunset.

Kylie Jenner lookalike Demi, who was first propelled into the spotlight when she was linked to the reality star’s ex, rapper Tyga, after they split.

She previously admitted that ‘genes, a hell of a lot of hard work and dedication in the gym and a good well balanced nutritious diet’ is the key to her generous derriere.

In September, the Birmingham-born beauty told MailOnline: ‘I try to keep as healthy as I can. With travelling, it’s hard to work out, I travel across the world but try to keep my routine.

‘Everyone says I’m the healthiest person they know. The fattiest thing I will ever eat is nuts and peanut butter.’

‘My figure just gains weight so fast. Any bad thing I eat my body isn’t used to it and just puts on the weight. That means no birthday cake!’

It appears acting may also be on the cards for the model as she has previously discussed a desire to get into the film industry.

Speaking to The Sun, she revealed: ‘Movies have always been a passion of mine since I went to stage school. But another ambition is to become a Bond Girl, as I love the style and glamour of those films’.

Kylie Jenner lookalike Demi was first propelled into the spotlight when she was linked to the reality star’s ex, rapper Tyga, after they split.

The star has since gained a huge following on Instagram and she is known to display her incredible curves in a number of risque ensembles.